Accountability has to start at the top and trickle down

Accountability is a multifaceted word that will mean different things to different people, but for a short definition of what it is, all you have to do is dissect the word itself. Accountability is being accountable for your own abilities and actions, which sometimes means raising your hand and saying “I need help,” and other times telling your supervisor, “I missed the mark on this.” In one study, 91% of respondents stated that accountability was one of the most important things they’d like to see in their workplace, yet 82% of those respondents believed they had no power to hold anyone else accountable. There’s clearly a discrepancy surrounding accountability in the workplace, which is why leaders should be putting an even greater emphasis on it.

Like any other culture change, accountability has to start with top-level employees and trickle down throughout the rest of the company. When organizational leaders are emphasizing and exemplifying high levels of accountability, lower-level employees will be inspired to do the same. When individuals are accountable for themselves and others, it increases their sense of empowerment which makes them more motivated and incentivized to offer solutions and contribute to results. Accountability and productivity go hand in hand, so if you want to maximize your company’s output and profit, you should focus on these four things to increase your workplace accountability. 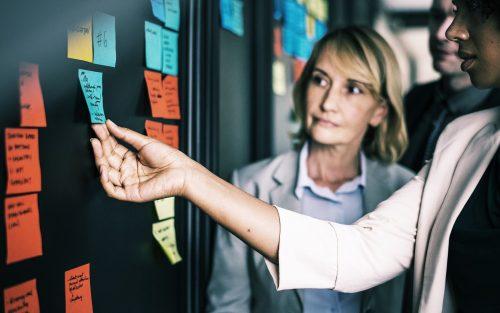 The American Society of Training and Development (ASTD) did a study on accountability and found that your chances of completing a goal increases to 65% if you tell someone about your commitment to it. Even more impressive, those odds raise 95% if you have a specific meeting with your accountability partner. These meetings not only give you insight as to how your employees are doing in relation to their goals, but it also creates a conversation where they can take responsibility for what is and is not working.

This can seem daunting, but it’s actually one of the best ways to hold people accountable for their actions. When goals are public knowledge throughout the company, no one is able to hide behind their numbers and there’s not any surprises at the end of the quarter because everyone is aware of who is and is not reaching their goals. This shouldn’t be used as a tool to put people down for not reaching their goals, though, but rather a tool to celebrate those who did.

Avoid the Triangle of Blame

In order to avoid the Triangle of Blame, you first must educate your employees on what it is and how to recognize it. The Triangle of Blame is the common conflict that arises out of a lack of accountability, and it includes a victim, an offender, and a rescuer. In most cases, someone who perceives themselves as a victim reaches out to a rescuer, and labels the other person involved as an offender. For example, Susan goes up to John and says, “Can you believe the way Pete made me look bad on the call yesterday?” This creates a triangle of blame and forces John to be placed in the middle of the conflict.

By educating your employees on this concept, they’ll be mindful of when they’re placed in a Triangle of Blame, and they’ll know how to diffuse the situation. Rather than feeding in to Susan’s negativity, John would recognize the situation and get himself out of it by saying, “I think you should talk to Pete directly about that.” This response not only reduces conflict, but it also shows that John is holding Susan accountable for her actions. When the Triangle of Blame is consciously avoided, it increases the sense of accountability throughout the organization.

Recognize and Acknowledge the Various Levels of Accountability

Accountability falls in to a series of different tiers, so it’s vital that leaders understand which tier their employees are at. If your employees are at a basic level, it would be unrealistic to expect them to develop to an advanced level right away. If you understand where your employees are currently at, it’ll be easier for you to help them develop their skills to reach the next level. Additionally, it will be helpful for them in recognizing why you’re pushing for this culture change. When you understand that everyone is at a different stage in accountability, you’ll be able to give them the tools they need to successfully advance in it.

A team that lacks accountability is often coming up with excuses, missing deadlines, and pointing fingers at who’s to blame. Accountable teams, on the other hand, are reaching their objectives, communicating openly, and constantly course correcting to ensure they’re on the most successful path. After employees learn to own and take responsibility for their actions, they will take the right steps to recognize opportunities for improvement and moving forward. If you would like more information on how to help your team become more accountable, contact us today.

Check out our Cultivating Accountability Webinar!

The act of accountability is one of the most important aspects of a successful life – it has so many applications and so much possibility comes from it. Cultivating Accountability is the result of a deep exploration into this topic.  This course brings awareness to the necessity of accountability in company cultures, exploring blame, empowering conversations, responsibility, focus and counter-productive behavior. This webinar is on June 7th, 2019, but registration is open now!

About the Author: Steven Crawford

Over the span of his career, Senior Consultant and Director of Alignment and Accountability, Steven Crawford has established a well-deserved reputation as the go-to resource for resolving the most demanding business operations challenges, achieving critical operational and financial goals. Particularly effective in leading operations struggling with tough economic, competitive and regulatory conditions – he has mastered organizational, financial and leadership skills critical to strong, integrated operational planning and management.
Page load link
Manage Cookie Consent
We use cookies to optimize our website and our service.
Manage options Manage services Manage vendors Read more about these purposes
View preferences
{title} {title} {title}
Go to Top