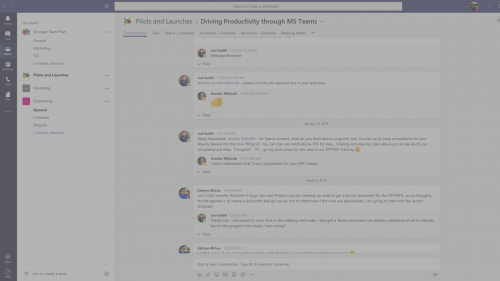 What was originally intended to make communicating at work easier, has now become a form of work in itself. In today’s world, employees are spending an average of 6.3 hours a day sending and receiving emails, which is daunting considering the typical work day is supposed to only be eight hours. Given this apparent time suck, a growing number of organizations are phasing email out as their primary form of workplace collaboration, and are adopting chat-based communication methods instead. While the formal structure of email still has a time and a place in the business community, collaboration platforms have grown increasingly popular, and after comparing the two forms of communication against each other, it’s easy to see why.

One of the biggest advantages to using a collaboration tool for workplace communication instead of email is the amount of time it can save employees each day. According to a study conducted by Danwood Group, it takes an average of 64  seconds to recover from an email interruption. Given the average person receives 96 emails each day, that adds up to a significant amount of time wasted not only on emails, but the interruptions that emails cause, as well. Emails consume the time and productivity of employees, which is why an increasing number of organizations are utilizing the time-saving aspect of chat-based collaboration tools.

Email is a closed communication system, meaning the individuals sending the message are able to decide who does and does not see the information, making collaboration not only difficult, but extremely confusing. When numerous people are getting cc-ed, bcc-ed, and forwarded the emails, it’s difficult to track who is aware of what, and what the most recent decisions are. In a study conducted by Salesforce, 86% of CEOs said that poor communication and collaboration are the primary causes for workplace failure. Email is not properly designed for collaboration, as there’s no ability to track projects and conversations in real-time like you can do with chat-based tools. If an organization is relying on email to collaborate on tasks, projects, or deadlines, it can often lead to confusion and mistakes being made, which ultimately leads to failure. Collaboration platforms are open communication systems that are built so that every person within a team can see and respond to information being shared, reducing confusion or uncertainty surrounding a project.

Lastly, collaboration tools give your organization’s departments more transparency than emails do, especially with lower-ranking team members. When individuals are using email to control who does or does not see certain information, it often results in others feeling left in the dark. However, when collaboration tools are being used, everyone is in the know, and no one is left feeling as if there’s information being hidden from them. This increased transparency will lead to more trust within departments, given everyone will feel free to voice their opinions and concerns, and they’ll trust what is being told to them. A 2015 study conducted by Interaction Associates found that high-trust companies “are more than 2.5 times more likely to be high performing revenue organizations” compared to low-trust companies. When collaboration tools can be linked to an increase in revenue, what company wouldn’t want to look further in to adopting them?

Similar to other tools on the market, Microsoft Teams was created as a means to improve workplace communication and collaboration, by offering instant messaging and video chat capabilities. Microsoft Teams, like most other collaboration tools, can be integrated with external applications, allowing for a simpler process to share and store documents and files. One of the major benefits that Microsoft Teams has over its competitors, though, is the unmatched ability to integrate Teams with any other Office 365 application such as Word, Excel, PowerPoint, and even SharePoint.

One of Microsoft Teams’ strongest content collaboration features is the ability to access and edit OneDrive documents without ever leaving the Teams app. Not only has Teams made communicating with coworkers quick and easy, but it’s also made working on a document with a group of people more efficient, too. Additionally, Teams pushes companies to adopt flatter organizational structures, as every person within a specific team is able to see the flow of information surrounding their work. By default, team conversations are visible to everyone in the group, meaning there is no information that is being withheld from individuals and everyone can see everything that’s going on. This open communication forum reduces the hierarchical structure that most organizations are built on and encourages more input from lower-level employees. When more people are getting involved in the conversation, it creates a shared-leadership and accountability approach to every decision that is being made.

The ROI on Collaboration Tools is Clear

In addition to the workplace benefits that come from adopting collaboration tools like Microsoft Teams, they can also produce a significant ROI for organizations that choose to invest in them. When employees are being more productive with their time, they’re able to get more of their work done in a shorter amount of time, which makes them feel more in control and balanced at the end of the day. This greater sense of control leads to happier employees, improved job performances, and higher output rates throughout the organization. In fact, one study found that the average ROI for Microsoft Teams is 832%, and that the tool pays itself off within the first six months of deployment.

Learning how to use a new digital tool will always intimidate some people in the office, but making the switch away from email and in to Microsoft Teams is well worth the time, energy, and money it takes to implement it. As you look at your organization’s technology road map, refer back to the 1990’s when email was first invented. Back then, there were companies who tried to say email was just a ‘fad’, yet 25 years later we’re still using it every single day. Microsoft Teams was not created to replace email, it was created to enhance and improve it, and like email, it’s here to stay.

Collaboration tools such as Microsoft Teams are permanently changing the way projects are completed in organizations, not unlike  email did in the 1990s! If your organization is considering a shift and investment into using a collaboration platform, the Driving Productivity Through Microsoft Teams program will help participants understand when and how to use Teams in relation to their role and other software applications.

About the Author: Chloe Gottschalk